The award for most nut-job movie on my watch list this year so far has to go to the ridiculously controversial but equally brilliant A Boy and His Dog. To be honest I had imagined Brewster McCloud was going to hold on to that title for sometime but no this apocalyptic tale really took the biscuit.

Tagline – An R rated, rather kinky tale of survival!

Starring a young Don Johnson long before he was living in Miami and had a vice for rolling up his suit jacket sleeves or losing his mind trying to decide if the hot pink shirt should go with aqua blue.

Vic and Blood aka Fuzzy Butt

He plays Vic a fearless young man who has learnt to survive on the barren wastelands of the harsh scorched Earth, scavenging for food and more importantly ladies. The nuclear war has turned everyone into savage nomads, reverted back to basic primeval instincts, violence and sex. Looking a lot like an early Mad Max film and preceding it by four years. Even featuring wacky contraptions for vehicles with added guitar player for car stereo replacement.

Taking place in a not too far distant future of 2024. The whole of Earth has been destroyed by nuclear war with WW4. The left over human populations has spread itself out over the land in makeshift tents, underground houses and buildings which have been covered over by the bomb blasts. There is also a large civilization that has managed to hole themselves within a large locked down bunker.

Vic’s only buddy is Blood (voiced by Tim McIntire). A lovely looking shaggy dog, who I must add puts in an oscar worthy performance. Now the brilliant thing is Vic and Blood have a telepathic connection. Maybe an after effect from the radiation? I don’t think it was explained but really who cares. Blood’s superb smell acts as a radar tracking down most things in the area especially “screamers” and a much needed lady for his buddy Vic’s “release”.

The movie is divided up into 3 parts, one on land, one in an underground buried school and the third part within the locked bunker. If you thought the first 2 acts are bonkers, well the last act might amp it up a level. Marching bands, painted faces, a robot and a milking seeding machine!

Blood – Breeding is an ugly thing.

It’s also quite strange to find out that it was directed by L Q Jones. A face you would of seen in a thousand westerns and numerous TV series. Not sure if the project was a tough shoot or not but he didn’t direct any more films after it. 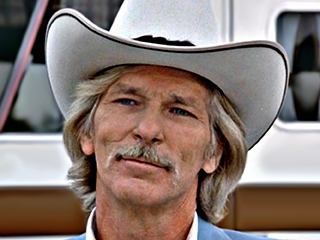 Fun Fact – L Q Jones real name is the amazing Justice Ellis McQueen, Jr. In fact his first acting role was in a film called Battle Cry (1955) where his character was called L Q Jones and he decided to keep using that throughout his career. Justice McQueen would’ve made a fantastic cowboy name.

Jump on in and give this dystopian apocalyptic science fiction movie a go if you fancy something completely different. It’s very un-pc so if you are easily offended I suggest you move on sharpish. If you do watch it i’m sure you will enjoy the total madness of this very original and most excellent film. Full movie on YT here.

Here’s me, Mikey Wolfman with my Boxer dog, Moses. Unfortunately his radar system is now broke!