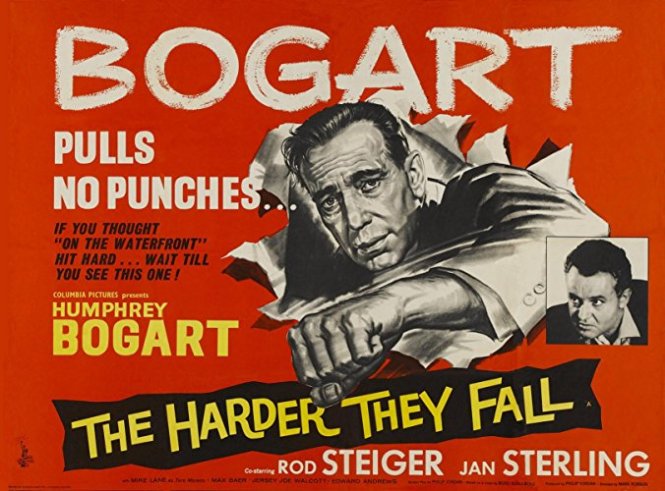 Not until it had finished and went to tick The Harder They Fall off my Humphrey Bogart films I must see list, that it dawned on me this was his final film before he passed away at the young age of 57. I have to say I didn’t realise he was ill whilst watching, he had all those classic Bogart characteristics and mannerisms we all so love. That world weary New York tough guy that hides a heart of gold, a style that you can imagine is naturally his real persona. He’s such a joy to watch and it’s great to know I still have a lot more Bogies to work my way through.

Humphrey plays Eddie Willis a respected sportswriter who hits financial problems when the newspaper he’d worked for years, goes under. Desperate for some cash flow coming in, he begrudgingly takes a job from gangster boxing promoter Nick Benko (Rod Steiger). Nick wants Eddie to be his press man, to rally up excitement for his newly acquired fighter, an Argentinian man mountain called Toro Moreno (Mike Lane). Unfortunately Eddie has his work cut out promoting this giant oversized fighter, he may look the part, towering at over 6ft 7″, but this wet behind the ears boxer is all visuals with no flare.

Now Eddie knows all about the dodgy backhanded tactics which goes on in the game, he wrote about it but now he’s involved on the inside. Nick and his crew go to work paying backhanders to Toro’s opponents to fix the fights. Toro in his naive, innocent way believes he’s winning each fight and destined to become the heavyweight champion. Winning enough money to send back to his family in Argentina.

Will Eddie’s conscience get the better of him? Will he be able to find his moral standing? What with the money, the lies and the constant danger to the lives and careers of boxers. Eddies reputation lies in the actions he writes about.

Featuring a few old boxers from the time, like Jersey Joe Walcott (trainer George) who had fought against Rocky Marciano, the inspiration for film, boxing legend Rocky Balboa. Max Baer former heavyweight champion plays pretty much himself as Buddy Brannen. Pat Comiskey, a man who dished out 61 KO’s, plays fighter Gus Dundee. The giant Argentine, Toro Moreno was in fact American wrestler Mike Lane going under the name Tarzan Mike. Plus on the showreel footage being interviewed is an older boxer called Joey Greb who looks like he took a right bashing, resulting in brain damage. 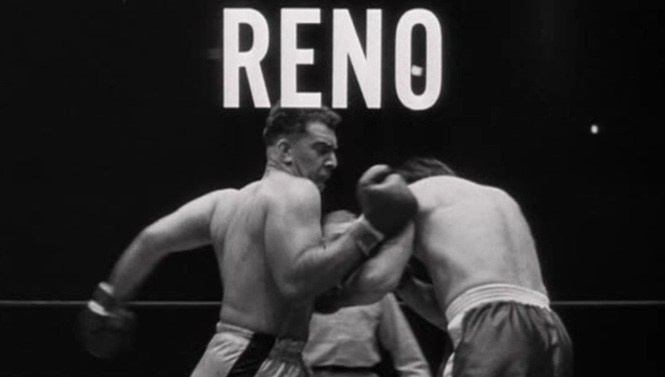 Taglines – No Punches Pulled! If you thought “On The Waterfront” hit hard… wait till you see this one!

The moral ground taken within the movie is that of the treatment of boxers, which went against their safely, resulting in the deaths and bouts of brain damage. Also looking at the tricks and cheating tactics used by the gangster like promoters, all after a fast buck, ready to exploit their fighter as much as they could. All under the notion that when that one’s on the scrap heap, another fighter will soon come along to take their place.

Directed by Mark Robson, who I know made another boxing film before this called Champion starring Kirk Douglas. It’s on my “to watch soon” list. The Harder They Fall is in fact based on a novel by a sportswriter called Budd Schulberg. A book which took ideas from real life and thinly disguised then within the novel. Later to be recognised as perhaps being based on the career of Primo Carnera and the scandal which surrounded it, with one writer saying he was “very much mob controlled”. Looking at the history of his fights it does sound unfair if it wasn’t the case but in a twist of fate or plainly added on purpose, Max Baer who fought and won against Primo for the heavyweight contest is featured in the film. It is also said that Humphrey Bogart character is based on boxing promoter Harold Conrad, a man I learnt did the publicity for that infamous Evel Knievel jump over Snake River Canyon.

I can’t wait to watch more Humphrey Bogart, not sure which film will be next but it sure gonna be great.