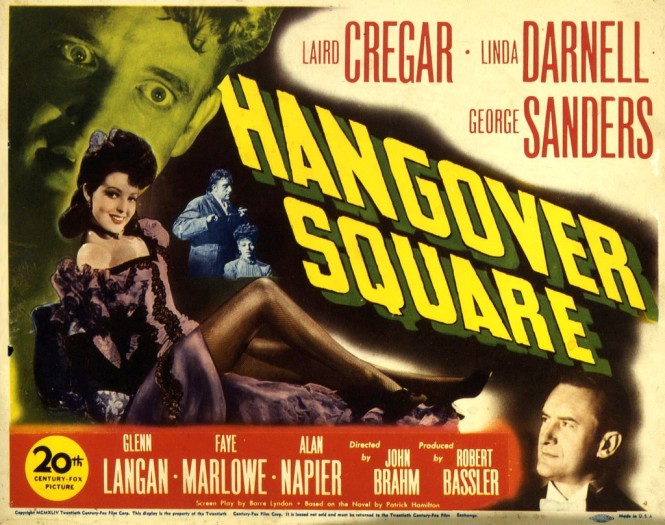 With no messing about, this film jumps straight into a POV murder. First a stab with a dagger then a double tap with a gas lamp. The victim isn’t just gonna die, he’s gonna burn too! In the first of a series of shocking and macabre death scenes Hangover Square really grabs your attention. I love it when a movie gamble pays off. Went into this film really for it’s short runtime. Not the ideal way to pick a film, I know. Had way too many late nights and the thought that if I ain’t digging it I’ll turn it off and get myself an early night. Haha no chance. I was hooked and instantly invested in the plight of George Harvey Bone (Laird Cregar), right from that first hard hitting opening scene.

George is a giant of a man. Wandering through the streets of Edwardian London in a daze. He looks lost and confused, innocent even. Look closer and you can see a drip of blood on his head. One thing we know from that first brutal murder is that this here man mountain is a killer. It’s no secret. George has a rare amnesia condition that is randomly brought on by certain loud, unexpected noises. When activated, George becomes a murdering maundering madman and loses up to a whole evening transfixed in this state. On waking he recalls nothing of his ways but he’s aware of his condition, declaring his worries to Dr. Allan Middleton (George Sanders) who gives George the all clear.

Barbara Chapman – “George has been so depressed about his lapses, are they really dangerous?”
Dr. Allan Middleton – “When he goes into one of his moods his subconscious mind has control. There’s nothing especially dangerous about that but if his condition at the time is aggravated by excessive concentration he’ll have an urge to destroy anything that stands in his way.”

Thing is George is a wonderful caring man and a genius composer with a gift for writing piano concertos. George is also a big lummox and a total doofus! With adoring Barbara Chapman (Faye Marlowe) doting after him and her father, Sir Henry Chapman (Alan Napier) ready to push George’s career into the limelight, George has it all! Until, that is, the darn sexy, all singing, all dancing club floozie, Netta Longdon (Linda Darnell) flashes her eyelashes at him. You guessed it, Netta is our naughty femme fatale. 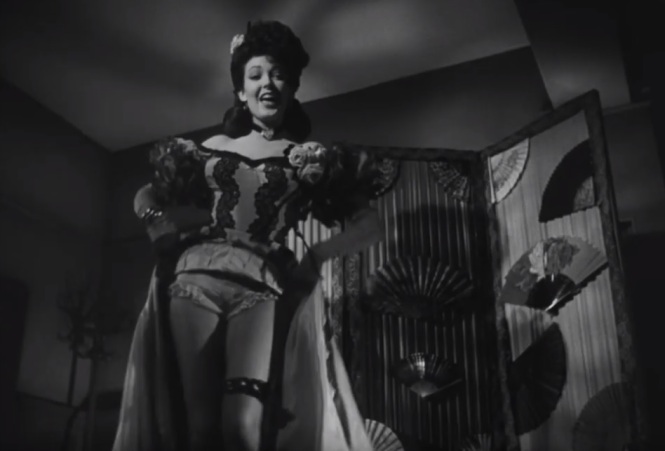 With the addition of George’s friend Mickey (Michael Dyne) and the dashing Eddie Carstairs (Glenn Langan) and not forgetting a siamese cat and a friendly man sitting down a hole. We have all our players on the table, what could possibly be about to happen in this film? Well I can tell you there’s some really shocking scenes that will have you gasping at the screen, “This was made in 1945! surely you can’t do that?”

Things I’ve learnt From This Film

Hangover Square is an entertaining dark edged film. You are there with George throughout his plight. Yeah he might get a little carried away when he’s in his “out of his mind” state but you still care for the big man. Netta on the other hand is just so darn sexy but you hiss and boo at her all the same. Like I say above, this was an unexpected surprise and I really enjoyed it. One I would definitely recommend if you haven’t seen it. Let me know if do or if you have.

Have fun with movies… Mikey Wolf