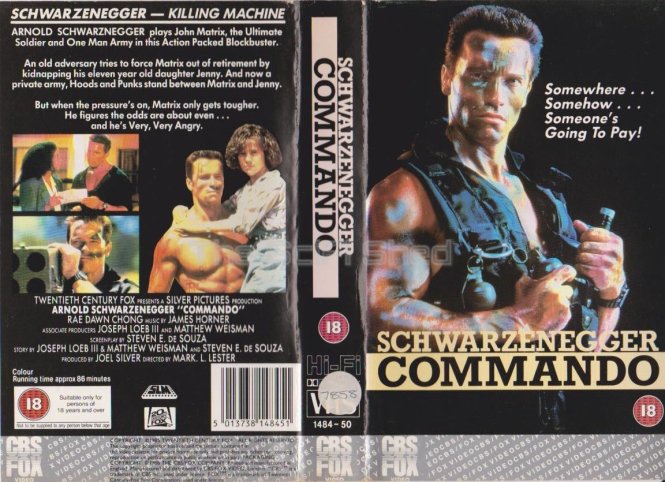 Tagline – “They hunted him down. They murdered his friends. Now they’ve taken the one thing he would kill for – his only daughter. May Heaven help them.“

Had I seen this one on VHS back in the day?
Many times. This video cassette flew off the shelves like hot cakes. Everyone was talking about Commando at school. Everyone wanted and needed to see it as soon as they could. This movie was perfect for the home movie rental market. And us teenagers were crazy for it. I even had the poster on my bedroom wall.

Quick plot run down.
Special Forces Colonel John Matrix is happily retired living in the mountains with his beloved daughter. When his old General friend turns up informing him his old unit is being killed one by one, John’s quiet life is about to end. When his daughter is kidnapped John Matrix has no option other than tool up and mow down bad guys.

Does the hero have a day job?
Retired United States Special Forces Colonel now a chilling kind of lumberjack and full-time Dad.

What’s our heroes special skills?
Every military skill known to mankind plus pretty handy with carpenters tools. Plus wonderful gardening skills. Hedgerows, rose bushes or trees need trimming? JM is your man. For a small fee he’ll happily cut back your unruly greenery with his trusty belt-fed machine gun.

Heroes drink of choice?
I would guess protein shakes, raw eggs with a drizzle of roid juice.

Does hero have a sidekick?
Beware an air-hostess carrying a M202A1 FLASH rocket launcher especially when she’s only just read the instruction manual. Cindy (Rae Dawn Chong) an innocent air-hostess in-between flights gets caught up in Matrix’s war. Lucky she’s learning to fly. Sure to come in useful when a seaplane is needed.

Hot girl? Damsel in distress or ass kicker?
Damn she mighty fine one. I was so in love with Rae Dawn Chong. Rae’s sweet smile melted my heart as a thirteen year old. I had fallen deeply in love with her before Commando in the break-dancing, hip hop movie Beat Street (1984). I was obsessed with her. She also got my love radar flashing in that film, that has probably been swept under the rug now, Soul Man (1986). I was all goo-goo eyed for sweet Rae. Imagine if I had seen Quest for Fire (1981) back then? Jeepers I would of exploded like that rocket launcher she fires off!

Arius – “Your father appears to be cooperating. You will be back with him soon. Won’t that be nice?”
Jenny Matrix – “Not as nearly as nice as watching him smash your face in.“

Psycho baddies rating out of ten? 8/10
Apparently Vernon refers to his character as “Freddie Mercury on steroids.” which is spot on. Hehe It’s very true and makes for an unforgettable baddie.

Heroes balls of steel and anger ratings out of ten? 10/10
Balls of steel? More like testicles shrunken to the size of two hazelnuts from constantly injecting roids into them. However our John uses his mini balls to fuel his power. Just thinking about his feline sized goolies makes him so mad crazy he becomes an unstoppable machine. If you listen carefully between each machine gun blast he whimpers “My balls my beautiful balls”

Surely it features a training montage scene?
Yes two. Now we rocking. One with his daughter Jenny (Alyssa Milano) as her loving dad teaches her, fishing, swimming, cooking, martial arts and… feeding deer. The second one is the classic montage of John getting geared up ready to cause mayhem. Camo paint, combat vest, getting locked and loaded, ready to bring the pain.

Does it feature an impossible mission?
Of course but hey when Arnie’s here it’s never gonna be impossible is it? John says it best “All fucking hell is gonna break loose”

Does the hero get a chance to show off their muscles?
Wouldn’t be an Arnold Schwarzenegger movie without his bulging muscles taking up half the screen. Why get geared up on the boat ready for action when you can strip down to your tight black pants and row to shore naked! Poor Cindy doesn’t know where to look!

Will I be needing to pause the video player? AKA are there any boobies?
Nice rack alert! Get those fingers ready on the pause buttons, it’s a quick fire pair. BAM! 47.06 is your time stamp. Haha that scene was world famous in the school yard. Not as legendary as Jamie Lee Curtis’s insanely beautiful moment in Trading Places (1983) which let’s be honest was a hard pair to beat.

Sex scene?
Not really. Only the above nooky moment disturbed as a big black bald-headed former Green Beret called Cooke (Bill Duke) comes smashing, flying through your motel wall whilst you’re having the time of your life with some cheap dollar hooker. Talk about passion killer! Actually, on another look (for film historical purposes) that scene has revealed that the couple had a camera set up filming themselves! The things you learn hey.

Any good totally random surprise scenes?
See above. That was a fun scene when it happened.

Innocent baddie death rate?
Well to be honest most of the South American dictator army didn’t have a clue what was going on. Just happy to be guarding their beloved dictator when BOOM world war three starts in the beautiful rose garden. Probably clueless to this giant mutant killing machine ruining their nice peaceful day. The mercenaries on the other hand all deserved it. 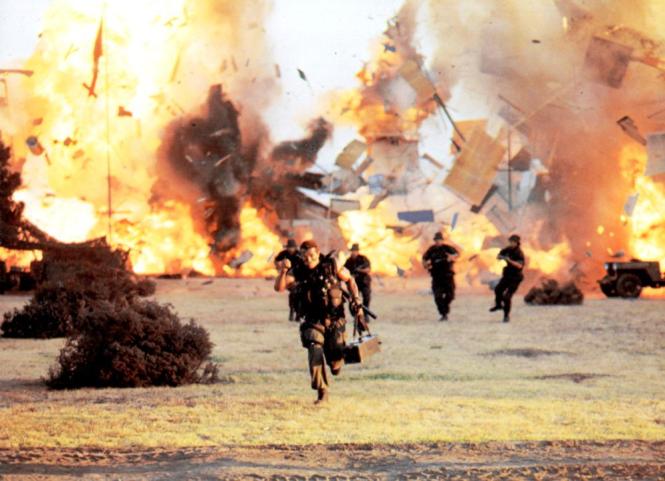 How many stuntmen probably really died making this film?
The stuntmen were flying about all over the place. One guy got blown up and span through the air like an Olympic diver. He must of done five flips and twists before landing in a heap. They were smashing through glass windows, diving off rooftops and getting crushed into concrete. There had to be some pretty mashed up stuntmen at the end of filming. We are truly thankful, we applaud your serves to action.

Best lines
Cooke – “You scared, motherfucker? Well, you should be, because this Green Beret is going to kick your big ass!”
John Matrix – “I eat Green Berets for breakfast. And right now, I’m very hungry!”
Cindy – “I can’t believe this macho bullshit…”

Any other familiar faces and actors pop up?
Lots to do here. I’ll start with John’s daughter Jenny. Alysaa Milano would grow up to become one of the sexy witchcraft sisters in the long running series Charmed.

King of the slimy characters David Patrick Kelly plays Sully. He will always be to me, Luther the beer bottle clattering “Warriors come out to play eeee a!” guy. Recently he’s been in two John Wick movies and the revival series of Twin Peaks which I loved.

Which brings us to Bill Duke. Of course we all remember him teaming up alongside Arnie as Mac in Predator (1987).

Very quick glimpse of fan boy fav Bill Paxton as an Intercept Officer. He’d been seen in other Arnie movies as a punk thug in The Terminator (1984) and then getting the excellent role of sleazy Simon in True Lies (1994)

I’ve already done the legend of Vernon Wells over on the Fortress (1992) review.

Production Credits
Commando was directed by Mark L Lester who had just written and directed the school terror film Class Of 1984. The story was originally very different before being re-written to fit superstar Arnold Schwarzenegger better. I read that it was hoped a sequel would be directed by John McTiernan with a script that was in part Die Hard. Arnie wasn’t interested in reprising his role so the script was adapted into the iconic Bruce Willis film we all love.

Cheese-O-Meter! Low/Medium/High?
yeah it has it big cheesy moments. Noted above with the rocket launcher which blew up a police van with an uninjured Arnie inside.

Closing thoughts………………………………………….
This was one of the quintessential action movies to see. The film is relentless. From the second the garbage truck turns up, right to the last dying moment. There’s no complicated plot. Just dad goes completely ape shit to get his daughter back. All padded with some memorable baddies and that nostalgic steel drum pans playing constantly in the background.  I might of not seen it for many years but it was as if it hadn’t ever stopped playing on my VHS player.

PS The Making Of Commando 1985. Great little insights into the films. An excellent watch. (The imagine below is pixelated but the video is not at all)