Tagline – “An overworked lawyer. An undercover cop. In a town where everyone is for sale… they’re the best that money can buy.“

Who’s our hero today?
This is a buddy movie so we get two for the price of one. Fresh from fighting mutant fish in Leviathan Peter Weller steps up to play Roland Dalton. And making his first appearance on my film blog. That man with the tash and that wonderful gravely drawl, Sacramento Sam Elliott plays Richie Mark.

Had I seen this one on VHS back in the day?
I did see this one but I wasn’t sure at first. I knew it as Blue Jean Cop which it was called in the UK at the time. Now I know it’s real name is Shakedown. And that is a way better title to what we got!

Quick plot run down.
The New York Police Department is infested with corruption. Cops with a passion for making extra money on the side. Taking bribes, robbing drug dealers and working for drug lords. A gang of cops that look out for each other, all on the take. With the death of an undercover cop by a young black drug dealer pleading self-defence, a public defender steps up to help. As the corruption gets deeper and more dangerous the public defender will need help from his veteran cop friend.

Does the hero have a day job?
Roland – He’s a chilled out hippy Manhattan public defender and legal aid lawyer. With a new job opportunity courtesy of his soon to be wife’s father, he will be leaving defending criminals to working on Wall Street at the end of the week.
Richie – He’s tough as nails, lone wolf veteran renegade NYPD narcotics agent. Where he lay his hat is his home.

What’s our heroes special skills?
Roland – An inquisitive mind, determination and has zero tolerance for dirty cops.
Richie – No shit’s given all round action hero. Ready to pounce into full force take down crazy at any given time.

Heroes drink of choice?
Roland – Some kind of hippy magic potion juice! Milk, fruit juice, maple syrup, coffee and a raw egg all downed to the sound of Purple Haze by Jimi Hendrix.
Richie – Drinks beer out of a brown bag hobo-style and when he’s going out-out he goes for a quadruple whisky and a beer chaser.

Does hero have a sidekick?
No need for sidekicks as they got each other but they do kind of get one for a little bit. A crazy taxi driver (Tom Mardirosian) who tries to get them to the courtroom on time and sticks one up to the man.

Hot girl? Damsel in distress or ass kicker?
No love for Richie but Roland is soon to be married to his fiancée Gail (Blanche Baker). All was going well until his old flame turns up as prosecutor Susan Cantrell (Patricia Charbonneau). A love affair is started in a very unconvincing side plot.

Who’s the main baddie?
There’s ton’s of them here, what with all the dodgy cops! The main cop baddie is Rydel (Larry Joshua) sporting a big mullet. He tries to be hardcore but I couldn’t help thinking he looked like Zed (Bobcat Goldthwait) from Police Academy. Rydel is tight with all the corrupt cops within the police precinct. He works for big time drug-lord Nicky NC Carr (Antonio Fargas) who has the machine, Big Leroy (Henry Judd Baker) as his right hand man.

Heroes balls of steel and anger ratings out of ten? 9/10
Roland – “I’m white and I can’t fight” is braver than he thinks. He comes in at a 7.5/10
Richie – Richie on the other hand is a pure crazed psycho! He saves it mainly for the end but his bonkers action rating hits 10/10

Does the hero get a chance to show off their muscles?
Only Richie’s muscly mustache.

Will I be needing to pause the video player? AKA are there any boobies?
Booby surprise attack at time stamp 24.39 and just when you think that’s all what’s on offer! All hell breaks loose within the walls of a seedy brothel, peepshow, strip club and sex shop.!

Sex scene?
Lots going on while the above is going down. Plus Roland gets some unseen action with his ex girlfriend.

Any good totally random surprise scenes?
There are a few involving stunts but I’ll go for a monologue from Richie. It’s a big one. Don’t worry I copy and pasted it! Thank you to whoever took the time to write it. Anyway it’s random and reminded me of the scene in There’s Something About Mary (1998) NO not that scene!!! Any way you gotta read it in Sam Elliott’s superb southern drawl…… 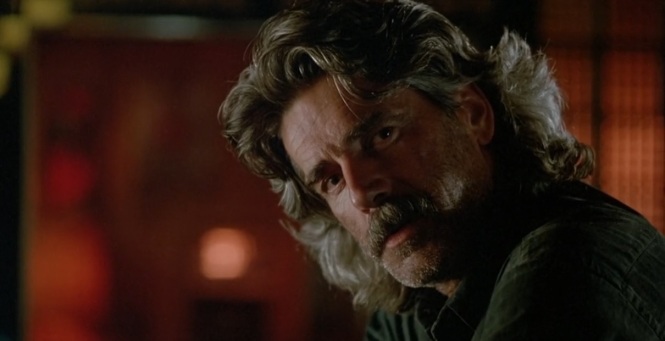 “I met the love of my life once. Only I killed her dog before I got a chance to tell her. Man, she was everything I ever wanted. I met her at Shakespeare in the park. Told her I was a lawyer – that line seemed to work for you. Rained like hell that day. I had an umbrella. We went back to her apartment, she went to the bathroom, I sat on the couch. She had this great big damn dog. Dog had a ball. I threw the ball, the dog brought it back. I threw it again, harder. I’ll never forget the sound of that dog’s paws on the newly waxed floor. How was I supposed to know she’d left the window open? The dog fell thirteen floors and landed on a parked car. I looked out the window, took one look, threw up, and left. Left. Without ever tellin’ her she was the one.”

How many stuntmen probably really died making this film?
Sam’s stuntman looks just like him as you only have to stick a wig and big mustache on him and from a distance you won’t know. Peter’s on the other hand doesn’t look much like him but they get past this by having him frantically wave a gun in front of his face as the two race through the city on a tricycle motorbike. There are some super crazy stunts but hopefully it looked like they all survived this film! 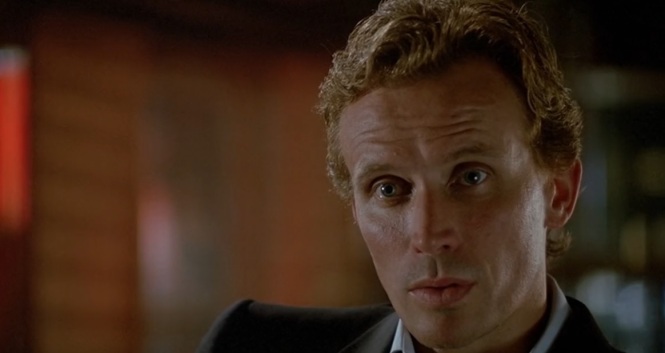 Any cool car chases?
I’m gonna use this section for one of the craziest scenes in the whole film that had me howling with laughter. BIG ass spoiler coming up but really it doesn’t matter in the slightest. Right Roland is driving a Porsche along a runway chasing a jet plane. Hardcore Richie is standing in the passenger side. He jumps onto the front wheel as it takes off firing his gun up into the plane. Then grabs a grenade, pulls out the pin and throws it into the landing gear compartment. As it fly’s over the Hudson River Richie jumps off as the plane explodes. NOW that’s 80’s action!

Best death?
I missed a trick on these Q/A’s I should of had a best death! All I’ll say is the roller-coaster death ride is pretty freakin insane…..

Any other familiar faces and actors pop up?
There’s quite a few faces but I’ll just pick one. There’s an early acting role for Holt McCallany who plays a rookie roadblock officer. Holt appears in so many things but one of my favorites of his was a boxing melodrama that sadly got cancelled after one season called Lights Out (2011).

Production Credits
This film is directed and written by James Glickenhaus. He lets you know he also made The Exterminator (1980) and The Soldier (1982) as they are plastered in big writing on a cinema’s billboard as the stars walk underneath. Plus James made the recently reviewed The Protector (1985) with Jackie Chan.

Cheese-O-Meter! Low/Medium/High?
Well it was doing pretty well until Richie hopped on that wheel of the jet plane. See Car Chase above.

Closing thoughts………………………………………….
This was really fun. The dialogue is entertaining and off the cuff. The two friends couldn’t be more different but you believed their friendship. “Richie, I love you man, but you are definitely new to the planet!“. It’s a shame Sam Elliott doesn’t get as much screen time as Peter Weller but when he does come alive he makes you punch the air with awesomeness. I’d of signed on for a series of the adventures of Roland and Richie if they would of made TV show. Yeah the baddies are cartoonish and the story pretty silly but all in all I really enjoyed re-watching this action thriller.

PS Blu-Ray released by Shout! Factory. The trailer is really well edited and to the sound of Purple Haze. Does make the film look awesome. 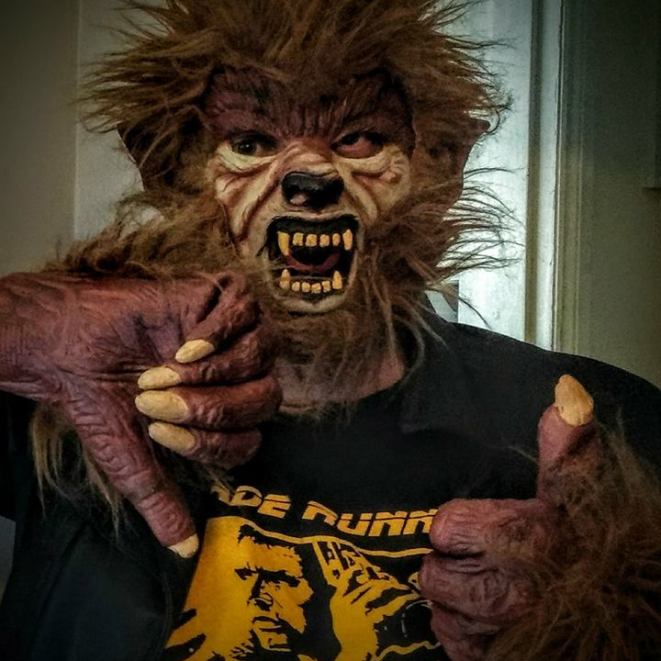