Had I seen this one on VHS back in the day?
Early 90s this little gem kept me up at night whilst I’d be drinking beer and having a little puff on something. It was all a bit of a haze to be honest. For those reasons alone I’d only really remembered the massive robots and the star Gary Graham’s scarred face. I probably had more fun with it this time round. It’s a real blast of stupid fun.

Quick plot run down.
Post World War III after a nuclear war. Two big superpowers have stopped killing each other on the battlefield. Instead they sort out their disputes with one-on-one battles with gigantic mechanoid robots piloted by Robot Jox. The western-influenced Market and the Russian-influenced Confederation. Each side using their finely tuned operator and a whole array of specially designed weapons. With a traitor within the camp of Market, secrets are being feed to their opponents. Achilles one of the last original human jox is tested when not only his bloodthirsty adversary wants him dead but the young genetically-engineered new jox stepping up to take his place. 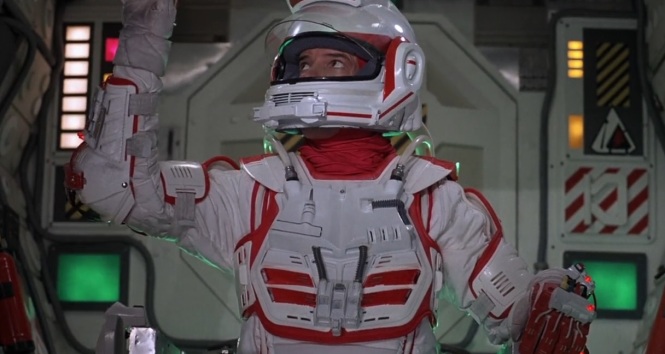 Does the hero have a day job?
Achilles (Gary Graham) is Market’s champion Robot Jox. He has won nine fights and will fight his final match against the Confederation for the territory of Alaska. If he wins his tenth challenge he will retire as a hero.

What’s our heroes special skills?
Achilles is a kung fu expert, skillful tactician and all round good guy.

Heroes drink of choice?
In a crazed moment of depression, down the local Robot Jox watering hole, he works his way through the alphabet of booze. He makes it to “J” before passing out.

Does hero have a sidekick?
He has two kind of sidekicks. He is supported by the genius robot designer “Doc” Matsumoto (Danny Kamekona) alongside his close friend and battle strategist Tex Conway (Michael Alldredge).

Hot girl? Damsel in distress or ass kicker?
Athena (Anne-Marie Johnson) is the tough and determined genetically engineered new designer Robot controller to be specially created to fight for the next generation. If she can pass the tests, she will be the first female jox to compete. Achilles doesn’t show it at first but he’s attracted and rather impressed with her. She gives her genetically engineered brothers a run for their money.

Who’s the main baddie?
The Confederation champion and all round psycho is the Russian Alexander (Paul Koslo). He will cheat and kill to get his wins. He always seems to be one step ahead of Markets tactics which implies he’s being fed secret information through a spy within the camp.

Baddies special skills?
Along with his really bad Russian accent and his loud obnoxious ways, Alexander is a total dickwad.

Psycho baddies rating out of ten? 7.5/10
He’s as annoying as he is despicable and murderous.

Heroes balls of steel and anger ratings out of ten? 8.5/10
He might be becoming old and outdated and soon to be replaced but Achilles is ready to crash and burn to win, right till the bitter end.

Surely it features a training montage scene?
Another missed opportunity here. What were they thinking?

Does it feature an impossible mission?
Not really. Not when they are already training up the next generation of super Robot Jox to take over the fight. But for poor Achilles, no one has ever made 10 straight fights!

Does the hero get a chance to show off their muscles?
Yes he does and a little more than he had expected. Waking up after his alphabet booze fest with Athena admiring his battle worn robot smashing todger.

Will I be needing to pause the video player? AKA are there any boobies?
Athena has a quite delightful peachy bot-bot.

Sex scene?
Not on screen but you know when the film finishes there’d be some double A action that was just way too naughty to be recorded on film!

Any good totally random surprise scenes?
The genetically engineered students get put through their paces. Having to go through a random climbing frame training assault course. A metal twisted frame that goes off in all directions. The task is to get to the top and climb through a small circle hole. Little do they know as soon as they start their ascent the booby traps begin. The whole frame rocked and shakes. Then ELECTRIFIED!. Fake bits of frame, heated metal and also fighting between themselves to win. It’s a great scene.

Films body count? Low/Medium/High?
A lot in one section of the story.

How many stuntmen probably really died making this film?
I’m pretty sure they were all safe here. All the robot work is miniature scale. So unless some crazy stunt man put his name forward for an experimental shrinking procedure to operate the models and possibly got vaporized as small as an atom! I’d warrant a guess all the stuntmen returned home to their loved ones in one piece.

Any cool car chases?
No car chases but we do get to see Achilles use his remote controlled car to smash through a wall.

Any other familiar faces and actors pop up?
Gary Graham is a bit of a legend. Not only did he star as Detective Matthew Sikes in the Alien Nation series and TV movies I loved during the 90s. He is also part of the Star Trek Universe starring as Vulcan Ambassador Soval through the whole of the Star Trek: Enterprise series.
Ok Paul Koslo! Paul fookin Koslo! He maybe pretty cheesy in Robot Jox but the mans’s a total legend. Too many films to mention but here’s a few favs. Mr. Majestyk (1974) The Omega Man (1971) Rooster Cogburn (1975) Vanishing Point (1971) and Lolly-Madonna XXX (1973).

Cheese-O-Meter! Low/Medium/High?
Ok this is sky high cheese but that is exactly what makes it good. We here for the cheesy, the camp and the quirky and Robot Jox joins the dots between the lot and it’s wonderful for it.

You got a random factoid?
Gary Graham plays guitar in the Star Trek band The Sons Of Kirk.

Closing thoughts………………………………………….
Ok this is pretty bad. However in the cult world we do all love bad films that are good. Robot Jox is mighty fun for it concept, has super robot designs, even if that means we get strings and wires in close up shots. It all adds to it’s wonderful charm. I love it’s silliness. Robot Jox is on Netflix at the time of writing.