Tagline – “He’s been chased, thrown through a window, and arrested.  Eddie Murphy is a Detroit cop on vacation in Beverly Hills.“

Had I seen this one on VHS back in the day?
Hell yeah. Eddie Murphy was the don. Obsessed with Trading Places (1983) which I’d recorded on to VHS alongside 48 Hrs (1982). Eddie was a young guys dream. He had everything, funny, cool and charming. With just those two films alone I’m sure everyone would of been happy if that was all we got from Eddie Murphy.. Then Beverly Hills Cop arrived on the shelves of the local video store! Excitement overload. These three films were perfect for teenagers and adults alike. He was a superstar. Then I saw Best Defense (1984)? Even at that young age we all knew that wasn’t his fault. So that was forgotten and the other three films were religiously watched over and over.

Quick plot run down.
Streetwise, action ready, Detroit cop Axel Foley leads his own sting operation that goes recklessly wrong, causing colossal damage throughout the city. With a slapped wrist he’s put on reprimand with orders to stay out of trouble. When a close friend visits he soon finds himself caught up in murder he is determined to solve. With holiday leave to take he decides to take his vacation to Beverly Hills to follow the case. This hardened city cop is about to ramp things up for the chilled cops of Beverly Hills as he fights crime on his own terms.

Does the hero have a day job?
A maverick Detective on the Detroit Police Department.

Heroes weapon of choice?
I’d like to say his infectious laugh but he’d like say his Browning Hi-Power sidearm.

Heroes drink of choice?
I’m sure it would be lemonade, that cool refreshing drink.

Does hero have a sidekick?
As soon as Axel arrives in Beverly Hills trouble surrounds him. Straight away poking the hornets nest as he begins his investigation. Soon finds himself assigned two local cops to tail him. Two cop’s for Axel to torment and amuse himself with. Sergeant John Taggart (John Ashton) and Detective Billy Rosewood (Judge Reinhold) soon learn there’s a novel way to use a banana. “NOO not there! you weirdo’s! In a cars exhaust“. These detectives aren’t used to the hard way city cops work. But soon these rookie police offers are gonna step up and love that Axel danger.

Detective Rosewood – “Wow. You know, it says here that by the time the average American is fifty, he’s got five pounds of undigested red meat in his bowels.“

Hot girl? Damsel in distress or ass kicker?
Axel visits his old friend Jenny Summers (Lisa Eilbacher) who just happens to be rather smoking hot. “I can’t believe how you’ve filled out?“. Lucky she also happens to work in the art gallery of the baddies he’s investigating….. This is the third time Lisa has appeared this month on the wolfy film blog. Turning up as Charles Bronson’s daughter and fighting a creepo-zoid in 10 To Midnight (1983) to fighting freaky mutant fisho-zoid in Leviathan (1989).

Who’s the main baddie?
Bad guys duties go to art gallery owner Victor Maitland (Steven Berkoff) and his henchman Zack (Jonathan Banks). With millions in money bonds and drugs being smuggled through his gallery, this drug kingpin will kill and kidnap to get his way.

Baddies special skills?
Zack is his right hand man with a murder streak. I’m sure you will recognize Jonathan Banks as another hit-man. Breaking Bad’s very own Mike Ehrmantraut.

Psycho baddies rating out of ten? 8.5/10
With his gang of heavy’s, Victor is a dangerous man.

Heroes balls of steel and anger ratings out of ten? 9/10
Just another day on the job for this rebel Detroit cop.

Surely it features a training montage scene?
The last one of this month marathon could of gone out with a cool montage but no it didn’t happen.

Does the hero get a chance to show off their muscles?
No not on this Axel adventure. Maybe part 2?

Will I be needing to pause the video player? AKA are there any boobies?
To be honest you can’t really call yourself a good cop movie unless you got a strip club scene. Thank you Beverly Hills Cop we love you.

Axel Foley – “Billy, you know, you don’t have to be embarrassed if your dick gets hard. Your dick is supposed to get hard. See? That’s the whole object of this. Taggart’s dick is hard, but he won’t let you know ’cause he’s the boss. Boss’ dick got to stay limp, right? See, I ain’t on duty so my dick can be hard.“

Any good totally random surprise scenes?
Everything was on the straight and narrow however I could squeeze in the random art work in the gallery here to fill this space. Spinning heads on dinner plates!

Explosion ratio? Low/Medium/High?
I might be wrong and missed one but for an 80’s action movie it’s extremely rare not to have an explosion!

Any cool car chases?
One carnage filled massive lorry city smashing chase through the Detroit streets right at the beginning.

Best lines
I wanted to find something else but it wouldn’t be right not to quote the classic would it. So without further ado please say it Axel Foley – “Get the fuck out of here!”

Any other familiar faces and actors pop up?
So many! I’ll grab a quick few I haven’t expanded on above with films from the video rental era.
Judge Reinhold in the classic Fast Times at Ridgemont High (1982)
John Ashton is amazing in Midnight Run (1988)
Ronny Cox is in both this video rental gems Total Recall (1990) Robocop (1987)
Steven Berkoff pops up in both Rambo: First Blood Part II (1985) and Outland (1981) 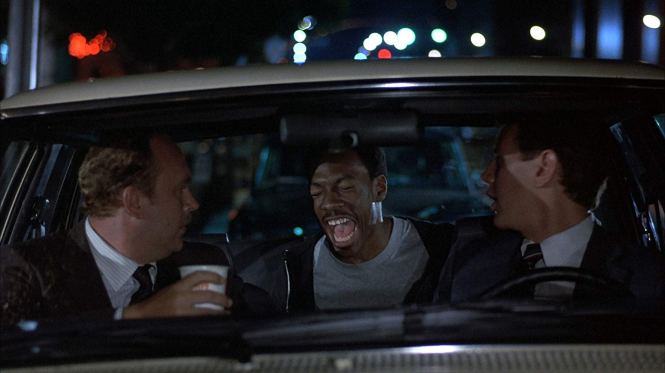 Production Credits
Beverly Hills Cop is directed by Martin Brest who didn’t made many films but he did do one of my all time favorites in Midnight Run (1988) with Robert De Niro and Charles Grodin. He also made Scent Of A Woman (1992) with Al Pacino and the wonderful coming of old age film Going in Style (1979). Unfortunately his last movie went a bit wrong Gigli (2003) (it gets 2.5/10 on imdb) and it looked like he said “Fuck this shit!” after and went radio silent.

Cheese-O-Meter! Low/Medium/High?
Just a few cheesy puffs here. Like the ones that drop down the sofa and you find them a few days later. 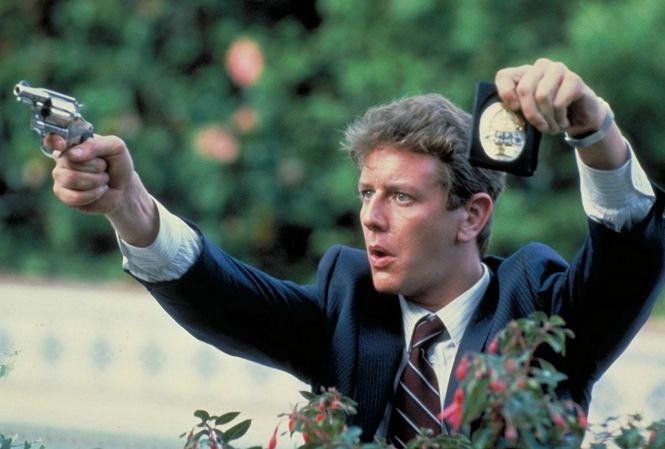 Closing thoughts………………………………………….
Eddie Murphy was pure dynamite. Everything he was in had to be seen. You’d be doing his catchphrases for years, probably still doing them now! His viewing power was so strong that we even went to see his comedy special Eddie Murphy: Raw (1987) at the cinema!!!! You wouldn’t even dream of going to see a stand-up show on the big screen nowadays. I love most of Eddies’ films even the the later not so good ones. One of my favorites of the later years is the underrated Bowfinger (1999) Oh that film cracks me up. Hang on a minute.. STOP the press. I’ve just noticed “announced” that he might be coming back as Axel Foley in Beverly Hills Cop 4! WTF! Sign me up….

PS I’ve done it, wow it got really difficult on the last 10 days. I didn’t think I’d make it but I combined all the forces of all the action stars to help me fight through the tough times. I will be doing a round up post ranking the 30 films in order and then catching up with comments I’ve missed and getting to posts on blogs I follow. I really appreciate all that endured having their wordpress feed filled with me and the great comments and likes that you’ve kindly left. Thank you for joining me. Big love……. Mikey Wolf